from 146 £/day
Test winner
Convincing service
More than 34.000 happy customers
4,5 / 5
Cancellation free of charge
Up to 24 hours before pick-up Up to 24h before renting
We are happy to assist you with your booking!
booking@driveboo.com
Car Hire
North America
USA
California
San Francisco

The secrets of San Francisco with a hired car

The unique ambience of San Francisco is a result of its proximity to the ocean, the iconic hills that form the city’s backdrop, and the world-famous Golden Gate Bridge spanning the San Francisco Bay Area. The city is full of historical buildings, mind-blowing museums and art galleries, green parks and walkways, and interesting architecture—all making it a jewel of Northern California.

San Francisco is perfect for your summer holiday. Unlike other American cities along the coast, even in summer San Francisco's temperatures only climb to a comfortable 24 degrees Celsius, making it a welcome change from the heat in other parts of the country. Grab a hired car and head out to the city's most famous landmarks. Marvel at the giant Golden Gate Bridge or experience "Lombard Street", the city's most famous street, first-hand as you drive your hired car along the winding and steep route. Stroll through Fisherman's Wharf, the popular waterfront district on San Francisco's north coast, for a lunchtime stroll. Enjoy a variety of restaurants, cafes and lunch watching the many sea lions along the rocky coast. Fancy a special view of the city? Then get on one of the historic streetcars that take you up San Francisco's steep streets with gradients of up to 31 degrees. Summer in San Francisco also offers a lot of cultural activities with many different outdoor festivals and exhibitions for every visitor. Experience the city up close with your hired car and look forward to your summer in San Francisco.

Find your hired car for a tour around San Francisco

San Francisco is literally full of car hire companies. There is a plethora of vehicles to choose from. Therefore, hiring a car might seem like a daunting challenge. The easiest way to do it is by hiring a car at the airport.

The closest airport to the city centre is, of course, San Francisco Airport (SFO), located 12.3 miles (20 km) away. However, many travellers also choose to arrive at Oakland Airport (OAK), located 20.9 miles (34 km) from San Francisco.

Do I need an international driver's license to hire a car in San Francisco?

Fortunately, the US has entered into an agreement with most EU countries. This agreement is a guarantee that your national driver's license is enough to move around San Francisco in a hired car.

However, some car hire companies require their clients to be holders of an international driver's license, so it is better to apply far ahead of your trip in order to avoid any obstacles caused by a delay in your application.

Driving a hired car behind a school bus

When you’re driving in the US and see one of the famous yellow school buses in front of you, you must stop for as long as the driver has the stop sign out. Passing by, even at a slower pace, is not allowed and is punishable with large fines.

Highlights of San Francisco with a hired car

Enjoying a stunning location against the backdrop of dramatic ocean and offering a wide variety of attractions, San Francisco is considered one of the top destinations in California. While visiting the city, you can’t miss the following highlights: 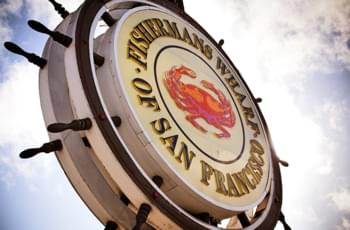 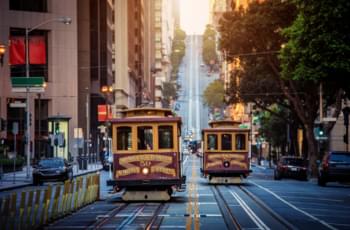 Wave San Francisco goodbye and head for the endless summer of Santa Cruz. This beach town will cater to the needs of even the most demanding beach lovers. Take a stroll along the famous Beach Boardwalk and spend a couple of hours on Main Beach. More remote beaches include Natural Bridges Beach, Sunset State Beach, and Cowell Beach.

Berkeley is another must-see Californian city. This university town offers a stunning campus located on a scenic hilltop. Visitors will also have a unique opportunity to admire the city’s beautiful architecture and its many libraries, research centres, and galleries. You should definitely head for sites such as Sather Tower, Bancroft Library, or Sproul Plaza.

For those who enjoy solitude, Half Moon Bay is a great escape from the ambience of the large cities. A rural retreat located alongside the roaring Pacific Ocean, Half Moon Bay can be found only a stone’s throw from San Francisco city centre. The city offers picturesque pathways, hiking trails, and great weather conditions for those who would like to try their hand at surfing. Many popular surfing events and competitions are held at Mavericks Beach.

Those who aren’t fed up with the glamour of a large metropolis should also consider a trip to Los Angeles. The famous City of Angels with its bustling Hollywood district and many entertainment venues will be an ideal spot for a day full of fun.

Car Rental in the vicinity of San Francisco