from 30 £/day
Test winner
Convincing service
More than 34.000 happy customers
4,5 / 5
Cancellation free of charge
Up to 24 hours before pick-up Up to 24h before renting
We are happy to assist you with your booking!
booking@driveboo.com
Car Hire
North America
USA
California
Los Angeles

Dive into the highlights of Los Angeles with a hired car

The lively metropolis of Los Angeles, perhaps more commonly referred to by its initials LA, is the USA’s second most populous city. For decades, this cultural centre of California has been associated with the entertainment and film industry. Hollywood long ago became a natural magnet for performers coming to Los Angeles from all over the States.

Los Angeles is a very diverse city when it comes to tourist attractions. It offers magnificent shopping venues, intriguing art galleries, and fine dining spots. Those who seek a relaxing stay will love the opportunity to visit LA’s hot beaches and explore the surrounding countryside. Families with children will also find Los Angeles very entertaining with such attractions as Universal Studios and Disneyland.

Dive into the highlights of Los Angeles with Driveboo—check the offers of all local car hire companies and book your hired car in Los Angeles online in next to no time.

You do not have a plan yet where to go in summer? Then we have something for you! How about a summer in Los Angeles? Get a hired car and take your loved ones to Hollywood, Yosemite National Park or go shopping. A summer in Los Angeles will be the number one topic of conversation long after that. On Driveboo.com, you'll be spoilt for choice with a wide range of vehicle models to choose from. Don't hesitate, make the summer months your dream holiday in Los Angeles.

What is the best time to travel to Los Angeles?

The best time to visit the popular City of Angels is from March to May, but September to November is another good choice. Average temperatures during those two periods range from 16 to 25 degrees Celsius. The temperature is more bearable during those months and the city is a little less crowded.

Find your hired car for a voyage around Los Angeles

On the road in Los Angeles

Los Angeles offers an extensive choice of car hire companies all over the city. The car hire offering in the city leaves absolutely nothing to be desired. However, the most convenient way to equip yourself with your dream vehicle is hiring a car at the airport. Los Angeles Airport (LAX) is situated 19.6 miles (31.5 km) from the city centre. Many travellers also choose to arrive at Hollywood Burbank Airport (BUR) located 16.2 miles (26 km) from L.A.

Do I need an international driver's license to hire a car in Los Angeles?

Fortunately, the US has entered into an agreement with most EU countries. This guarantees that your national driver's license is enough to move around Los Angeles in a hired car. Nonetheless, numerous car hire companies require their clients to present an international driver's license, so it is better to apply far ahead of your trip in order to avoid any obstacles if you encounter a delay.

Driving a hired car behind a school bus

When you’re driving in the US and see one of the famous yellow school buses in front of you, you must stop for as long as the driver has the stop sign out. Passing by, even at a slower pace, is not allowed and is punishable with large fines.

Where can I go in Los Angeles with my hired car?

Being one of the most popular destinations in California, Los Angeles offers endless attractions for all types of tourists. Whether you are searching for a peaceful stay or a holiday full of entertainment, you shouldn’t miss the following attractions: 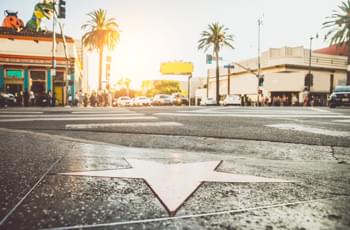 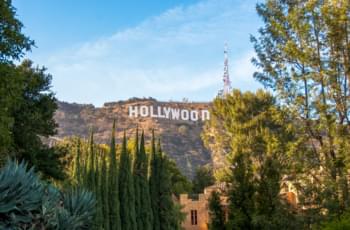 Leave the city limits and explore the region around Los Angeles. A hired car will grant you the freedom to go exploring in whichever direction you want. You can start with the beautiful pristine beaches and Mediterranean-like climate of the coastline, which will allow you to feel an endless summer on your skin.

You can also visit Venice Beach or the idyllic Long Beach, where you will find some relief from the hustle and bustle of the metropolis.

Santa Barbara, also referred to as the American Riviera, is another spot for those who enjoy long hours spent in the sun. The city offers a wide selection of tourist attractions ranging from extensive gardens to interesting art galleries.

For those who are into old Hollywood glamour, Palm Springs is a must-see attraction. In the 1930s, it was a top winter resort visited by such great performers as Marlene Dietrich and Frank Sinatra.

Joshua National Park should be included on your holiday to-visit list if you are a lover of vast open spaces. The park was named after the interesting yucca trees that flourish within its limits. This natural gem offers a wide selection of outdoor activities suitable for those seeking an active holiday.

Those who aren’t fed up with the clamour of large metropolis should also consider a trip to San Francisco. 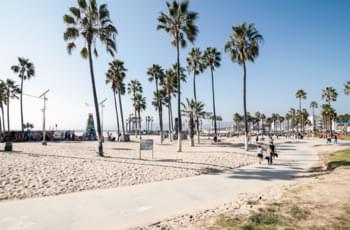 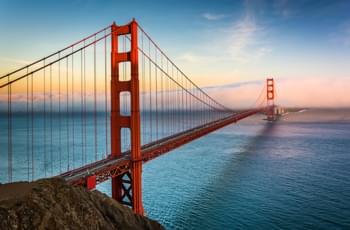 Car Rental in the vicinity of Los Angeles