from 47 £/day
Test winner
Convincing service
More than 34.000 happy customers
4,5 / 5
Cancellation free of charge
Up to 24 hours before pick-up Up to 24h before renting
We are happy to assist you with your booking!
booking@driveboo.com
Car Hire
North America
USA
Florida
Miami
Miami International Airport

Would you like to explore Florida with your own hired car and arrive at Miami MIA airport? Then hire your cheap hired car directly at the airport from one of the ten or more car hire companies. Compare car hire companies at Miami airport with Driveboo from your home and book your car hire as soon as possible so that you don't have to search for a hired car after your arrival.

Due to its size and the high number of passengers involved, the car hire counters are not located in the airport building, but in the so-called MIA Hired Car Center on 3900 NW 25th Street in Miami. The Center can be easily reached by shuttle service. If your chosen car hire company is not located in this building, you will be picked up by most car hire companies outside the lobby in the building.

Feel the heat of the Miami Summer

The summer in Miami awaits you. Grab a hired car and explore the vibrant city at the southern tip of Florida. In summer, Miami's days get very hot and humid. Fortunately, the most beautiful beaches, such as the famous Miami Beach, can be found in and around the city. Here you can splash in the sea all year round, but the summer is ideal for this because of the extremely pleasant water temperature. The numerous surrounding water parks also offer an optimal opportunity for a small road trip with the hired car. But also in Miami itself there is something offered for everybody. Numerous museums, shopping malls and many other indoor activities open their doors daily and allow you to escape the heat of the city. If the temperatures drop towards evening, the city comes to life. Immerse yourself in one of the country's most diverse culinary scenes. From luxurious restaurants to hip cafes and street food, Miami has it all. Enjoy the nightlife in the clubs and bars of South Beach or relax with a bag of popcorn in one of the city's many outdoor movie theaters, which open at nightfall for movie lovers.

The best car hire service for you at Miami Airport

Collecting your hired car at the airport

If you have not decided to hire a car with a fair fuel system, you will literally find a petrol station at every corner of the airport. Therefore you don't have to worry where you can fill up your hired car.

With the hired car to Key West

Have you seen everything in Miami and tried everything? Then it's a good idea to take the hired car to some places of interest or maybe even go on a tour of Florida. An unforgettable experience is a drive with a hired car in the direction of Key West, but also a day trip to the Flamingo Center through the Everglades National Park will surely remain in your memory for a long time. If you're travelling with children or staying young at heart, you should definitely make a diversion to Disney's Hollywood Studios or the Universal's Islands of Adventure amusement park near Orlando before returning home.

Hire a car at Miami Airport and drive to Key West

Whether Miami Beach Boardwalk, South Pointe Park or Lincoln Road, Miami is not only a paradise for all water sports enthusiasts and those who want to see and be seen, but also an ideal starting point to travel to Key West by hired car or make a diversion to the Everglades. However, before you get started with your hired car, you should definitely take a look at the Holocaust Memorial and go to one of the stylish restaurants in the Art Deco Historic District. 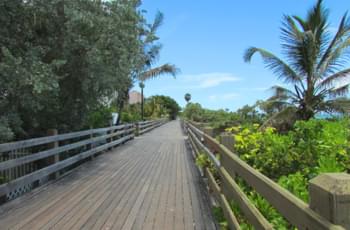 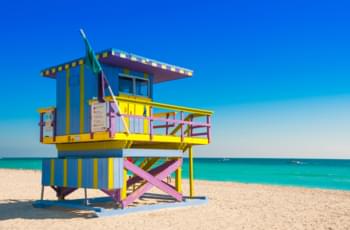 If you are planning a tour of Florida or maybe just a few excursions, we have put together a few kilometres to help you plan your trip:

Due to the optional location of the airport in the heart of the city, you can reach the city center with your hired car in just a few minutes. But if you don't want to get behind the steering wheel of your hired car right after your arrival, you can of course also take one of the taxis on your way. You can also reach the city center by Metrorail train, Miami Beach Bus, Tri-Rail or Metro Bus by following the purple signs at the airport. Current departure times and schedules can be found on the airport's website.

Our tip: You can reach the building of the car hire companies with the so-called "Mover", whose departure stop is located on the third floor between north and south terminal.

At Miami Airport, the third most important international airport in the United States, you will find a whole range of international restaurants in addition to bookstores to start your flight relaxed. However, if you are looking for a certain branded product in one of the duty-free shops and are under a little time pressure when you take off, it is advisable to have a look at the website of the airport where you can take a look at which terminal is which shop.

Car Rental in the surroundings of Miami International Airport