from 43 £/day
Test winner
Convincing service
More than 34.000 happy customers
4,5 / 5
Cancellation free of charge
Up to 24 hours before pick-up Up to 24h before renting
We are happy to assist you with your booking!
booking@driveboo.com
Car Hire
North America
Canada
Ontario
Toronto
Toronto International Airport

Things to know about Toronto

Toronto is Canada's largest city. About 2.6 million people live here. It is also the capital of the Canadian province of Ontario. Located on the beautiful Lake Ontario, Toronto is only about 100 km away from the USA. Since Toronto is located in the south of Canada, it has a very pleasant climate. Nevertheless, all four seasons are clearly distinct. With your hired car, which you can pick up at the Toronto Pearson International Airport, you can explore not only the city but also the surrounding area flexibly and comfortably without having to rely on public transportation. The city itself has many sights to offer, for example the CN Tower, which is one of the tallest freestanding buildings in North America. Hire a car of your choice online at low cost and discover the sights of Toronto comfortably by hired car.

Where is the car hire company at Toronto Airport located?

After you have received your baggage, you will proceed to the pick-up station of your car hire company. The car hire counters are located in the arrivals hall. After you have cleared all formalities with the car hire staff, they will take you to your hired car. Book your desired car online in advance. This way you can choose between different models and add extras. So your holiday in Toronto can start right after your arrival at the airport.

By hired car from Toronto Pearson Airport to the city

Are you travelling by hired car in and around Toronto? Then you can use various highways from the airport, such as the 400, 401 and 403, which guarantee ideal connections to the airport. Via Motorway 427 and the Gardiner Expressway you can reach city centre Toronto in the fastest way. Pick up your hired car at the car hire pickup station and explore Canada in a comfortable way.

What you should pay attention to in Canadian road traffic

If you are driving a hired car in Canada and leaving from Toronto Pearson International Airport, it is important that you adhere to the speed limits, as these are often checked by the police and are subject to heavy fines if you violate them. Please refer to the table below for the respective speed limits. The blood alcohol limit varies by province, but in Toronto it is 0.8, but drivers under the age of 21 and beginners must observe the 0.0 blood alcohol limit. In Canada, seat belts are obligatory for all passengers. In addition, adults are responsible for all children under 16 years of age. In Canada it is allowed to overtake on the right side of the motorway. Therefore, it is recommended to keep in the right lane when reeving. With your hired car you can drive from the airport to your hotel or to the sights of the city.

What are the speed limits in Canada?

After you receive your hired car at the car hire pickup location at Toronto Pearson International Airport, you will be taken from the airport to Toronto's attractions. 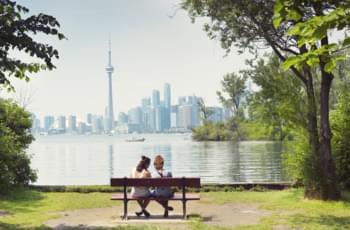 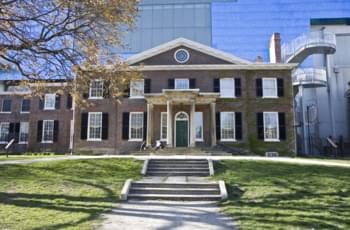 The Fairmont Royal York Luxury Hotel is one of the most imposing buildings in the city. Drive there from the airport with your hired car and take a look at the building. It is located opposite the main train station and offers its guests more than 1,600 rooms. This is where the British Royal Family is accommodated when they are on a state visit to Canada. The different heights and gradations make the hotel resemble a castle.

Beneath the city itself there is a 28 km long tunnel network, which is one of the largest underground cities in the world. Here you have the opportunity to go shopping in various stores. Numerous buildings, such as the Air Canada Centre, City Hall or CN Tower are connected to the system. Take a hired car from YYZ airport to Toronto and also take a look at the city's parks and gardens.

Car Rental in the surroundings of Toronto International Airport