Between extensive beaches, volcanic craters, wooded mountain slopes and lively street flair, a stay in Santa Cruz de la Palma offers a lot of variety and relaxation. Visitors should book a hired car to explore the beautiful port city and its picturesque surroundings comfortably, cheaply and flexibly. Santa Cruz de la Palma is the capital of the Canary Island of La Palma. About 16,000 inhabitants live in the municipality, which is located on the eastern side of the island directly on the Atlantic Ocean. Guests can find numerous offers for rental cars here - so they can arrange their holiday completely individually according to their desires and discover the sunny region in the south of Spain at their own pace. The car makes it possible to enjoy city life and nature to the fullest.

No desire for rain during your spring and summer holiday? Then let's go to Santa Cruz de La Palma! There is almost no rainfall from June to August and also the spring is relatively dry. So you can enjoy every day on the beach or in nature. A summer or spring in Santa Cruz de La Palma offers everything you dare to dream of: beaches, nature, nightlife. The best way to spend your holiday is to hire a car on Driveboo.com. Would you like to feel the wind in your hair and the sun on your skin? Then a convertible is an excellent hired car. Go on hikes, mountain bike tours or just relax on the beach. Whatever your perfect spring and summer looks like, you are guaranteed to find it in Santa Cruz de la Palma.

Santa Cruz de la Palma is known as a former colonial city for its historic city centre with many attractive buildings. The old town has been declared an art-historical monument and the extensive tourist offers attract many guests every year. With a hired car, for example, visitors can visit the town hall. The Renaissance building dates from the middle of the 16th century and has a beautiful wooden covered ceiling and several frescoes. As usual for the port city, part of the façade is whitewashed in a radiant white.

Another highlight are the many churches spread all over the city. The 14th century pilgrimage church of the Virgen de las Nieves is worth a visit. It has a magnificent silver high altar added in the 17th century. Since the church is located in a higher area on the outskirts of the city, visitors can reach the site conveniently by hired car. The numerous offers allow everyone to hire the right car.

On special occasions it is also worthwhile to book a hired car: Every five years the pilgrimage church is the scene of the popular festival "Descent of the Virgin from the Snow" (Bajada de la Virgen de las Nieves), during which parades, concerts and dance performances take place. If you want to hire a car, you should also visit the churches Iglesia Matriz de El Salvador, Iglesia de San Francisco and Iglesia de San Francisco. The Museum der Seefahrt is also a special excursion site. Here the famous ship Santa Maria was rebuilt, with which Christopher Columbus discovered America in 1492. 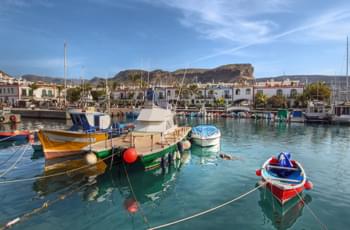 By boat to Gran Canaria