from 128 £/day
Test winner
Convincing service
More than 34.000 happy customers
4,5 / 5
Cancellation free of charge
Up to 24 hours before pick-up Up to 24h before renting
We are happy to assist you with your booking!
booking@driveboo.com
Car Hire
Europe
Italy
Sicily
Trapani
Vincenzo Florio Airport Trapani-Birgi

Pick up your hired car at Trapani Airport

Trapani is located in the northwest of Sicily and is the capital of the province of the same name. The city offers in itself not only an incredible scenery and culture by the sea but offers itself as a perfect starting point for a road trip. With a hired car, such a road trip can be made a lot easier. Simply and comfortably pick up your hired car at Trapani Airport (TPS) directly after your arrival by plane. Reserve the hired car in advance comfortably from home online via our comparison portal Driveboo. We have already selected the best offer and suitable hired car for you from the numerous car hire companies and all you have to do is compare prices and choose the right car for you.

Of course, summer is the perfect time by the sea to rest on the beach and enjoy the sun as much as you can. Also in Trapani you have the opportunity to do so, since the city is located directly at the sea. But just lying on the same beach all the time can get a bit boring in the long run. So be sure to hire a car for your holiday in Trapani and make some exciting excursions or go on a little road or city trip in the surrounding area. Below you can find some beautiful beaches in the area of Trapani, which you can easily reach by hired car. 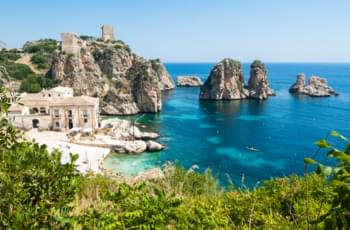 Various leading national and international car hire companies are located at Trapani Airport. Some examples can be found in the following list:

The car hire counters for information, filling out the rental contract and picking up/returning the keysare located in the arrivals hall of the airport.

The airport is located a good fifteen kilometers south of the center of the city of Trapani near the village of Birgi on the border with the neighboring municipality of Marsala.
It is a military airport open to national and international civil traffic with a modern infrastructure capable of handling a larger number of flights and passengers. The passenger terminal, renovated in 2009, is located in the southeast of the airport site. The total area in the terminal for the public is about 11.000 square meters.
The passenger terminal is closed from 0:30 am to 4:30 am daily. The opening hours may vary depending on operational requirements. Please check them in advance on the airport's website.

Dining and shopping at Trapani Airport

On the first floor of the "Vincenzo Florio" airport are the check-in counters, waiting area, baggage carousels. There is also a cafeteria and visitors lounge, a handicapped accessible lounge area, car rentals, airport information counters, first aid rooms and an ATM for cash withdrawals and other transactions.
The airport offers several food and shopping areas. Passengers can enjoy a large area in the departure area (second floor), designated for food, retail and services. Special attention is given to the sale of typical local food and products, for which the Trapani region is known worldwide.

Trapani, Marsala and the southwest coast of Sicily are easily accessible via the Strada statale SS 115, Palermo via the A 29 motorway, which starts just north of the airport and joins the A 29 at Alcamo. Please note that some sections of freeway are subject to tolls, it concerns the A18 and A 20. A distance-based toll is collected. It is best to have suitable cash ready. Card payment may not be accepted everywhere. 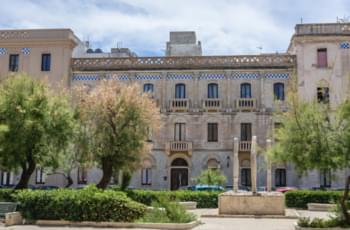 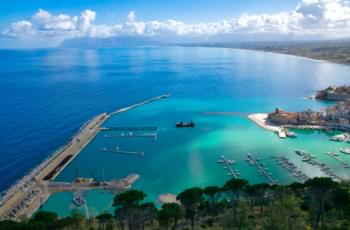 The terminal does not have its own rail connection. Two kilometers to the south is the Mozia-Birgi train station, but there is no bus service to it from the airport. Trains run from Mozia-Birgi to Marsala and Castelvetrano in the south, as well as to Trapani and Palermo.

Trapani is located in northwestern Sicily on a protruding promontory at the foot of Mount Erice, the crescent shape, the Greek term for a crescent is "Drepanon", helped give it its name.

The capital of the province of the same name has a good 70,000 inhabitants, it has the most important commercial and ferry port of Sicily, in addition, trade, the production of salt and canned fish and shipbuilding are important economic sectors. Somewhat suffered the reputation of the city due to the activities of the Mafia, in 2001 the Mafia boss Vincenzo Virga was arrested, it followed still numerous politicians and industrial entrepreneurs.

Car Rental in the surroundings of Vincenzo Florio Airport Trapani-Birgi