from 18 £/day
Test winner
Convincing service
More than 34.000 happy customers
4,5 / 5
Cancellation free of charge
Up to 24 hours before pick-up Up to 24h before renting
We are happy to assist you with your booking!
booking@driveboo.com
Car Hire
Europe
France
Île-de-France
Paris

Explore Paris driving around in a hired car

Paris, the metropolis on the Seine, is one of the most popular tourist destinations in Europe. The Louvre, the Eiffel Tower, the Arc of Triumph and the Obelisk of Luxor are just a few of the top attractions that almost every holidaymaker visits. But Paris has much more to offer than just the 'hotspots.' Anyone who wants to get as much as possible out of their stay in the city of love should definitely opt for hiring a hired car. On Driveboo, you can compare car hire deals in and around Paris, select the car that best suits your needs, book it conveniently online and save lots of time.

Are you planning to go on a trip to Paris this summer? Even though the city is not located by the sea, the capital of France can be a real idyll. Usually, we know Paris as a fast-paced city with a lot of busy people searching for the next metro-stop. This image changes during the summer. The schools are closed and many of the Parisians go to the south of France. But why not spend some nice days in Paris? But what can be done in Paris in the summer?

Here are some tips for a great summer stay in Paris! 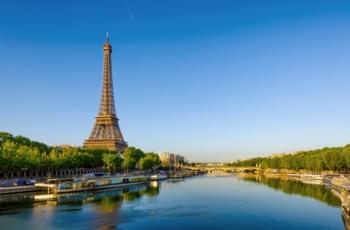 View of the Eiffel Tower in summer 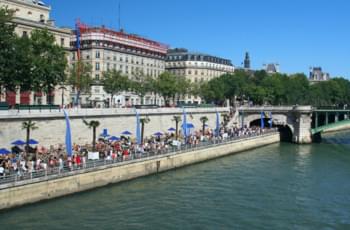 Parisian beach on the Seine

Where can I hire a car for my Paris trip?

Those who do not travel by train will probably start their city trip at one of the following airports:

At the airport, you will benefit from multilingual staff, which is especially useful if you do not speak French yourself. Choose a comfortable compact car, a well-stocked mid-size car, a luxury car or even a family van and embark on an exciting tour around the city of love.

But beware! If you have not yet booked your flight, it is worth comparing the car hire offers at each of the above-mentioned airports, as the car hire companies at the airports tend to have different prices.

Do I need an international driver's license to drive in Paris?

What are the traffic regulations in Paris?

Speed violations in France can result in unpleasant fines, so you should be sure to stick to the maximum speed limits listed below:

Tolls in and around Paris

Most French motorways are subject to a toll, so it is advisable to plan your trip in advance if you want to go outside of Paris with your hired car. In most cases, the toll is either payable when driving onto the motorway or a ticket must be drawn to pay the fee when leaving.

What road signs should I know before driving a hired car in Paris?

If you are not proficient in French, it is advisable to memorise some traffic signs before starting your journey. The most important traffic signs are listed below:

Where can I park my hired car in Paris?

Travelling with a hired car in Paris is not rocket science. A wide range of car parks, where you can park your hired car from just one euro per hour, makes it easy for you to get to most of the beautiful sights in the city. However, if you are in the suburbs and cannot find a parking garage, then it is advisable to pay attention to the lane markings, which tell you whether or not you can park your car there. A general stopping ban applies under bridges and in tunnels or underpasses.

Explore Paris and the surrounding area with your hired car

A single day in Paris is nowhere near enough time to see all the most beautiful parts of the city—even a single visit to the Eiffel Tower or the Louvre takes hours. In addition, there is so much to discover in various parts of the city and the surrounding area that, ideally, you should spend several days in and around Paris. The best way to explore all the sights of the city on your own is to hire a hired car in order to not to have to adapt to the pace of guided tours and to plan your trip the way you want it.

These highlights should be on your list during a first visit to Paris: 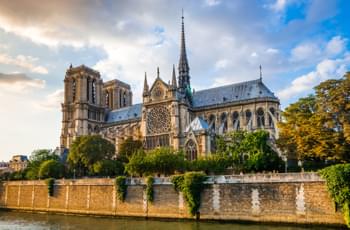 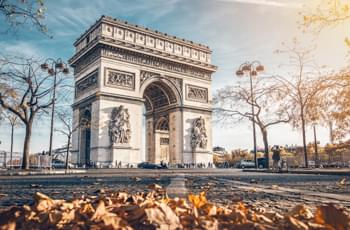 Anyone who has ever been to Paris and already knows the top attractions of the city may be interested in getting to know the lesser known, but equally interesting, places around the city. Take in the small Eugene Delacroix Museum, housed in an apartment where the artist was artistically active until his death, visit one of the largest European contemporary art exhibitions in the Palais de Tokyo or go to the market hall known as Le Carreau du Temple and follow in the footsteps of the Knights Templar.

So, you already know the Parisian Catacombs and have done a night boat trip on the Seine? Then you should take your hired car for a trip outside of the city. A must-visit place is, of course, the Palace of Versailles and—if you are not afraid of a long drive—even a day trip to Mont Saint-Michel, the UNESCO World Heritage Site in the Wadden Sea of Normandy. Those who plan to holiday in Paris with children can also take a trip to Disneyland, where the whole family will get money's worth.

Car Rental in the vicinity of Paris