from 84 £/day
Test winner
Convincing service
More than 34.000 happy customers
4,5 / 5
Cancellation free of charge
Up to 24 hours before pick-up Up to 24h before renting
We are happy to assist you with your booking!
booking@driveboo.com
Car Hire
Europe
Norway
Eastern Norway
Ullensaker
Oslo Airport

In order to explore Norway's breathtaking landscape in a flexible way, it is worthwhile to start a road trip with a hired car at Oslo Airport (OSL). With us, you can easily compare the offers of our partner rentals at Oslo Airport and find the cheapest offer easy and relaxed. After arriving at Oslo airport, all you have to do is pick up your keys from the car hire company and off you go!

From Oslo Airport by Hired Car

Norway's capital Oslo is the most populous city in the Scandinavian country. Around 650,000 people live here. The Oslo conurbation has a population of almost 1 million - about one-fifth of all Norwegians. The metropolis offers its visitors a successful mixture of modern comfort, historical sights and natural lifestyle. The city is nestled between fjord and forests. Hiking and skiing are popular sports here. There are also many green areas in the city. Along Akerselva, the main river through Oslo, there are hiking trails, parks and nature reserves. Those interested in history will also discover a lot in Oslofjord.

For a stay in Norway, it is worthwhile to hire a car at a car hire company. The unique landscapes outside Oslo can be explored wonderfully with a hired car. If you are arriving by plane, book your hired car for the pick-up station at Oslo Gardermoen Airport (OSL). You can hire your dream car online at the car hire company before your trip and pick it up at the Oslo Airport pick-up point after your arrival. Alternatively, you can hire a car directly at the Gardermoen airport branch office.

Oslo Gardermoen Airport (OSL) is the most important of three airports in the immediate vicinity of Norway's capital. It is located about 47 km north of Oslo. The other two airports - Sandefjord/Torp Airport and Moss/Rygge Airport - are located to the south. The modern airport is comfortably equipped. Numerous restaurants, shops, money exchange facilities and a baggage service can be found in the airport terminal hall. At Airport Gardermoen there is free WiFi and an airport app that keeps travellers up to date. At the OSL area, travellers can hire a car at a car hire company and pick it up from the pick-up point. You will find rental cars in a wide variety of sizes and price ranges from national and international providers at the airport.

Pick up your Hired Car at Oslo Airport

When you arrive at OSL airport, you will have to pick up your baggage on the conveyor belt and take care of all entry formalities. You can then go to the airport car hire office to pick up your hired car. Find out from your car hire company whether the office is located directly in the terminal hall or outside. The car parks of the pick-up station are located south of the airport terminal. From here, you can drive by car via Edvard-Griegs-veg or Lufthavenvegen in the direction of E16, and there are two petrol stations in the immediate vicinity of the airport: Fridtjof Nansen's veg and E16 at Edvard Grieg's veg near the driveway. The route to Oslo takes you from Gardermoen Airport in southern direction via E16 and E6.

For a stay in Norway, it is worthwhile to hire a car at a car hire company. The unique landscapes outside Oslo can be explored wonderfully with a hired car. If you are arriving by plane, book your hired car for the pick-up station at Oslo Gardermoen Airport (OSL). You can hire your dream car online at the car hire company before your trip and pick it up at the Oslo Airport pick-up point after your arrival. Alternatively, you can hire a car directly at the Gardermoen airport branch office.

Travelling in Norway with a Hired Car

If you are planning to hire a car at Gardermoen Airport for a reasonable price, some preliminary considerations will help you to make your stay in Norway a success. Consider whether you would like to hire a small car at a reasonable price or whether a larger hired car is better suited to your travel plans. Especially if you are planning a long trip to the north, a motorhome can be a good option. Part of Norway is located north of the Arctic Circle, so a suitable hired car with the right equipment is required for trips to northern Norway. Allow plenty of time for the routes. Many roads in mountainous areas are relatively narrow and winding. Careful, foresighted driving is required for these routes. If you want to enjoy the beautiful landscape, you can choose one of the 18 selected landscape routes. They are called "Green Roads" and lead through particularly interesting regions.

Which speed limits do apply in Norway?

Parking rules for the Hired Car in Oslo

If you hire a car from Gardermoen Airport car hire company, you will need to follow some parking rules when parking in Norwegian cities. Parking on the main roads is not allowed in Norway. However, there are numerous public parking spaces. The city area of Oslo is divided into several parking zones. Fees are highest in the red zone that covers the city centre. It is therefore convenient to park your hired car in the blue and green zones and take a walk city centre. Compared to other capitals, Oslo is not excessively large and is very pedestrian-friendly.

Travelling in Oslo: places of interest in the Norwegian capital

Oslo is a very green city. Numerous parks and green areas invite you to relax in the city area. One of the most beautiful is Vigeland Park with over 200 sculptures by the Norwegian artist Gustav Vigeland. Among the striking buildings are the opera house, the cathedral and the town hall, where the Nobel Peace Prize is awarded. Worth seeing are Damstredet with beautifully restored historic wooden houses, the Karl Johan's gate promenade and the trendy Grünerløkka quarter. If you want to learn more about the culture of the Scandinavian country, you can take a trip to the Norwegian Open Air Museum. 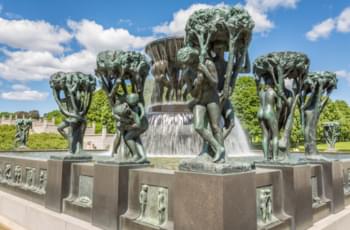 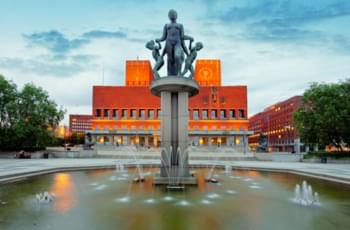 Car Rental in the surroundings of Oslo Airport