from 51 £/day
Test winner
Convincing service
More than 34.000 happy customers
4,5 / 5
Cancellation free of charge
Up to 24 hours before pick-up Up to 24h before renting
We are happy to assist you with your booking!
booking@driveboo.com
Car Hire
Europe
Italy
Lombardy
Milan
Milan-Malpensa Airport

Hire a car at Milan-Malpensa Airport

With a hired car from Milan-Malpensa airport MXP you are on your way to the beautiful region of Lombardy in Northern Italy. Numerous lakes, mountains and the mild climate invite you to explore with a hired car. By booking your rental vehicle through the price comparison you can easily and conveniently choose your desired offer including additional services from the numerous car hire companies at the airport. Thus, nothing stands in the way of a relaxed journey to Milan! 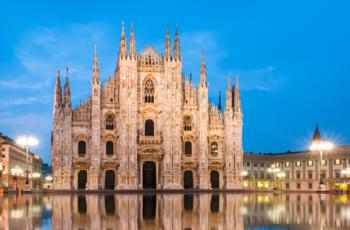 Are you planning a summer holiday in Milan? Then let us give you some tips on how to avoid getting too hot in the summer of in the Italian fashion metropolis. When the summer sun is at its highest point at noon, it's time for a little cooling off. Why not visit one of Milan's parks. Here you can have a picnic in the shade and stretch your feet in the water. Alternatively, you can visit a museum. The rooms are air-conditioned during the summer months, making it the ideal place to spend a hot afternoon in Milan. Drink, drink, drink. This especially applies during your summer holiday in Milan. Keep an eye out for the drinking fountains scattered throughout Milan. You are guaranteed to never run out of water. You are so hot and need a little refreshment? Then treat yourself to a delicious ice cream! In Milan you will find ice cream parlors on every corner that are guaranteed to lift your summer mood to seventh heaven. After such a refreshment you will certainly be fit again to explore the most beautiful sights of Milan. To avoid having to queue for hours in the blazing sun, we recommend that you order your tickets online in advance. That way you save time and your shirt stays dry despite the Milanese summer sun.

If you would like to hire a car at Milan Malpensa Airport, the following car hire companies are at your disposal:

Many airlines fly from Germany, Austria and Switzerland to Milan and back. But also long-haul flights, such as to New York City are offered from Malpensa Airport. You can find a selection of airlines and their destinations in the German-speaking world here:

By hired car, bus and taxi to Milan Airport

The Malpensa Express express train leaves Milan Cadorna station every half hour to Malpensa airport. The journey takes about 40 minutes, tickets are available at the ticket machine or online. On the way the train stops in Milan-Bovisa, Saronno and Busto Arsizio. Members of the Lufthansa Miles&More bonus program can redeem their award miles for one trip or earn new miles by presenting their customer card. There are several shuttle buses to Milano Centrale station, such as the Malpensa shuttle, which leaves every 20 minutes. Taxi stands are located in the arrivals area of Terminal 1 at Exits 4 and 5 and in the arrivals area of Terminal 2.50 km from the centre of Milan, Malpensa Airport is easily accessible by hired car.

Facilities at the airport

Free Internet access via WLAN available throughout the airport and can be used without registration. The speed is reduced to 512 Kbps, but there is no time limit. Discover the wide range of bars and restaurants at Milano Malpensa Airport. Many delicious refreshments and culinary delicacies whet your appetite! Terminal 1 offers you the most gastronomic offers, but you don't have to search long in Terminal 2 either. Shopping and last-minute shopping is also possible at the airport. There are branches of the well-known brands and designer labels as well as a Carrefour supermarket, kiosks and of course a Dufry duty-free shop.

Hire a car and explore the city of Milan

Milan is Italy's financial capital and, together with Paris, one of the world's fashion capitals. In the Middle Ages and early modern times, Italy's present-day economic metropolis was one of the most important trading and finance centres south of the Alps, alongside Venice and Florence. Since the Roman Empire, every era has left its architectural mark on the city. Under the influence of the Dukes of Milan, the city developed into a nucleus of the Italian Renaissance. The artist Leonardo da Vinci, who is regarded as the epitome of the universal genius, has worked here for a total of 25 years of his life. Some of his few surviving works can be found in the collections of various Milan museums. His mural "The Last Supper" in the monastery of Santa Maria delle Grazie is now a UNESCO World Heritage Site. The city's fashion and textile industry is world-renowned. Terms such as Milanese design and Milanese chic are regarded as trademarks for goods from the high-price segment. As a tourist destination, Milan is therefore particularly interesting for cultural and shopping tourism.

Car Rental in the surroundings of Milan-Malpensa Airport