from 43 £/day
Test winner
Convincing service
More than 34.000 happy customers
4,5 / 5
Cancellation free of charge
Up to 24 hours before pick-up Up to 24h before renting
We are happy to assist you with your booking!
booking@driveboo.com
Car Hire
Europe
Germany
North Rhine-Westphalia
Dusseldorf

Dusseldorf, the metropolis on the Rhine and the state capital of North Rhine-Westphalia, is an attractive city with a lot to experience. Especially with a cheaply booked hired car, all destinations in Dusseldorf can be easily reached. The old town, the Rhine-bank promenade, the Rhine tower, the many breweries such as many other sights, should be mentioned in particular. Dusseldorf in the heart of North Rhine-Westphalia is also a city for all gourmets and party people. When is a trip to Dusseldorf worth it? The city Dusseldorf has a lot indoor and outdoor activities to offer and is therefore ideal for a city trip throughout the whole year. This to say, Dusseldorf is also during winter worth a visit. Arriving the city by plane, it is recommended to pick-up your car at the Düsseldorf Airport. Booking

Everything Dusseldorf is known for

Dusseldorf is also often referred to as the city of the rich and beautiful. Visit the famous "KÖ, the Königsallee in the heart of the city", where many well-known designers from all over the world are based. 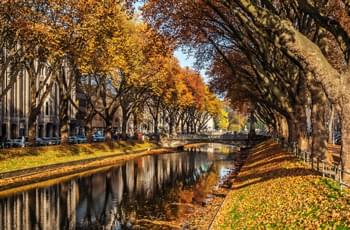 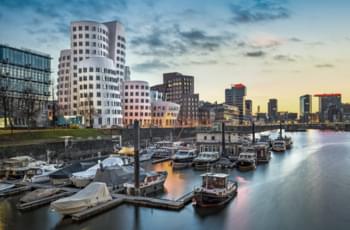 Reaching the old town of Dusseldorf

During the day as well as in the evening a visit to the fascinating old town of Düsseldorf should not be missing. It is easy to get there with your hired car. Sufficient parking spaces are available. The narrow alleys, the old churches and the distinguished, old trading houses here already offer a charming picture during the day, but in the evening the old town of Dusseldorf is filled with life. Then many trendy bars, clubs and restaurants open their doors. Above all, the traveller who wants to discover Dusseldorf is offered the original Düsseldorf with its slightly rough nature. Anyone who has ever sat at the"longest bar in the world" in one of the pubs will be able to confirm this. With Altbier and Haxen, the Köbesse (that's what they call the waiters here) will tell you one or the other story, it certainly won't be boring. During the day you can visit the many cultural and art institutions of Dusseldorf.

Daring a view from the Rhine Tower

Relatively new is the Rhine Tower in Düsseldorf, which offers a wide view over the Rhine and a part of the beautiful landscape. This square in Düsseldorf can also be easily reached by car. Built between 1972 and 1982, the tower is 240.5 metres high and there is a restaurant at an already very impressive height of 172.5 metres. The special feature here is that the restaurant rotates around its own axis once every hour. It doesn't matter at which of the 180 seats you sit, one can look in any direction within this hour. Those who only want to enjoy the beautiful view without eating can do so on the observation platform, which is 164 meters high. From here, when the view is clear, the traveller can even see Cologne Cathedral in Cologne.

Especially when you travel to Dusseldorf in summer, you can experience a Mediterranean-like attitude to life on the promenade along the banks of the Rhine. If you like, you can park your rented car in the old town or at the MediaPort and stroll from here. Go along the many cafés and bars and watch the ships sailing along the Rhine. After the KÖ, this is the second famous promenade of the city of Dusseldorf, here, not only the tourists but also the locals meet. For example for a boules game. In June, the famous Düsseldorf cartwheels will also compete here at the foot of the old town. These have become the symbol of Düsseldorf and decorate postcards, keyrings or similar souvenirs. The young gymnasts, however, who asked for a penny from the bystanders, have unfortunately long since disappeared from the townscape of the state capital of North Rhine-Westphalia.

A diversion to one of the two castles of Dusseldorf

Benrath Castle is located in a beautiful park outside the city centre of Düsseldorf. This can also be easily reached with the hired car provided by a car hire company. Museums here in the castle invite you to marvel and discover, such as the "Museum für Europäische Gartenkunst" or the "Naturkunde Museum". The park with its approximately 60 hectares of gardens borders directly on the banks of the Rhine. During a visit to the museum, you can also take a long stroll through the sea of flowers in the gardens. Afterwards, Schlosscafé is an ideal place for a rest period. The Jägerhof castle, where Napoleon once resided, can also be reached conveniently by hired car. Today it is always worth a visit with the cheap rented car due to the accommodated Goethe museum.

Discover Dusseldorf and its surroundings

Dusseldorf is especially beautiful in the spring, summer and autumn months. With your hired car, you are able to explore the city and its surroundings flexible and easy.

You can visit many places with your hired car, for example, famous sights are:

Your hired car gives you the benefit of discovering the sights of Düsseldorf at your own pace and off public transport.

In the list below, you will find some cities near Düsseldorf, which you can easily visit with your hired car: 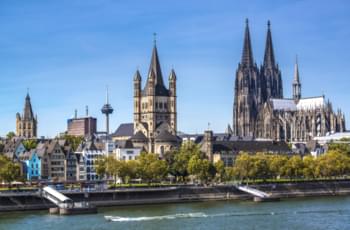 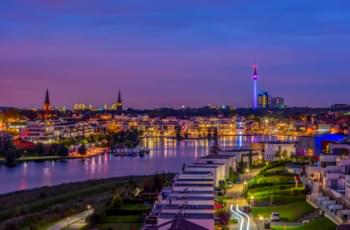 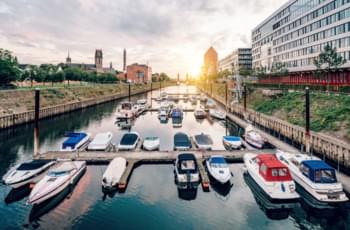 Car Rental in the vicinity of Dusseldorf