With more than one million inhabitants, Cologne is one of the largest metropolises in Germany. Located on the banks of the Rhine, the major city looks back on almost 2000 years of history. Since the founding of the FRG, Cologne has been assigned to the federal state of North Rhine-Westphalia. Due to numerous historical sights, many tourists are attracted to the Rhine metropolis year after year. Of course, every visitor to Cologne wants to visit the city's landmark, the cathedral with its two nearly 160 meter high towers. Many tourists then explore the historic Old Town, stroll along the Rhine promenade or visit the numerous existing museums. With a hired car you can reach all this much more comfortably and uncomplicated.

Culture North Rhine-Westphalia in Spring: On the Road with a Hired Car

Spring brings more life back into everyday life and lets us enjoy life even more. Also in Cologne everything comes back to life and you can finally do more. For example, a small boat tour on the Rhine to see the Rhine promenade from a different angle. If you want to see the first flowers or simply enjoy nature, then visit the botanical garden as well. But here grow not only spring flowers, but here you can easily see up to 12.000 plant species. In the spring not only the flowers start to bloom again, cafes and restaurants open their outdoor areas, beer gardens and also flea markets are visitable again. So you can spend a relaxing holiday in Cologne and to make it even more relaxed book a hired car beforehand so that you can get everywhere without stress.

Worth knowing about Cologne-Bonn Airport (CGN)

Increasingly, many people are choosing to travel by plane, as the few kilometers from the center, Cologne-Bonn Airport has optimal transport connections. The international airport CGN Koeln is located in the southeastern district of Grengel and is about 15 km away from the center of Cologne. It is 16 kilometers to the northeastern city center of Bonn. The airport, also known as Konrad Adenauer Airport, has only been used as a civil airport since 1957, although at that time it was only geared to national operations and had a simple terminal with no car hire facilities. About 13 years were to pass before the small airfield became a pretty international airport with a radar center and an air traffic control tower.
More than 10 million passengers were handled at Cologne-Bonn Airport in 2015, putting the airport in seventh place among German airports. The passenger volume, which has been constant for years, is also attributed by experts to the presence of low-cost airlines since 2002. Through our comparison portal you can also hire a car especially cheap at the airport for a stay in the metropolis on the Rhine, since we cooperate with every leading car hire agency in Germany.

You arrive at Cologne Bonn Airport at either Terminal 1 or Terminal 2, the arrival hall ultimately depends on the airline you use. Coming from the baggage claim area in Terminal 2, you ideally just keep to the left and reach your car hire in the car hire center set up there. Each provider has its own pick-up station, but it is just as centrally located as its office. After you have received the keys of your cheaply rented vehicle at the counter, you simply cross the street and find the corresponding pick-up station in parking garage 2. Before handing over, however, there are some important points to discuss.

Information for booking a hired car 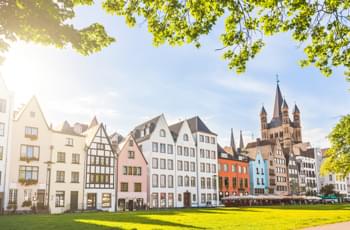 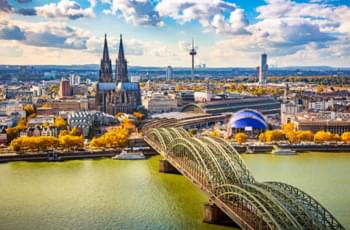 The last important information you must have before booking a hired car is that you can cancel the booked hired carfor free up to 24 hours. Therefore, you better book a hired car earlier so that you can get an early booking discount. Some rental companies offer a free cancellation only up to 48 hours, so pay attention to this when booking. To cancel the hired car just write us an email to "booking@driveboo.com" and from 72 hours before rental you should additionally let us know by phone at +49 89 1436 7940.

Cheap rental cars at CGN Airport: Here's what you should look out for

Of course, you have to look for perfect condition at the pick-up station with your hired car. Test in your own interest briefly the functionality of all important controls and take a critical look at the body. The reason: From the moment of the takeover on, you are responsible for the hired car and come up for, for example, fines due to improperly functioning lighting. If you don’t report already existing scratches or dents on the car at the takeover at the airport, the car hire company makes you liable as the culprit and makes the repairs at your expenses. Have all the defects you have noticed entered in a list, maybe even take photos and secure a copy of the document. Your car hire company will keep the original.

You usually pick up your hired car at any car hire company at their pickup station already full with gas and must return the car accordingly with a full tank. The refuelling regulation is used by most providers and requires a gas station nearby, which should also be open continuously. To comply with the refuelling regulation, drive to the Total gas station on the Cologne airport grounds shortly beforehand. This is less than a kilometre away from Car park 2 in Nordallee at the roundabout near Car park four and is open around the clock. If you do not return the hired car with a full tank of fuel, even though you have selected the "fair refuelling (full/full)" option, a small portion of your deposit will be retained to cover the cost of a full tank of fuel.

See the sights in Cologne with a hired car

The Cathedral in Cologne

The landmark of the city is the cathedral located in the center, a architectural masterpiece with two towers rising almost 160 meters . To ensure that your resolution to hire a car cheaply at the airport continues to be easy on the purse, you should park your hired car in the nearby parking garage. You will be compensated for the parking fees, among other things, with a breathtaking view of the city center. 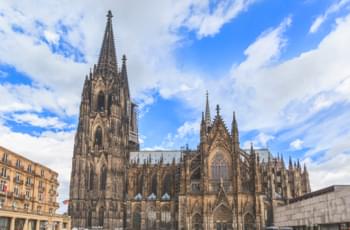 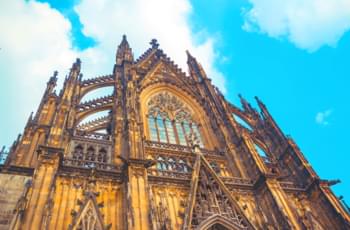 Viewing the cathedral and the city center from a completely different perspective is what you get when you visit the KölnTriangle. This is the second-highest building in the city, which, located on the right side of the Rhine, entices you with its all-round glazed roof terrace. When the weather is good, you have a perfect panorama in focus here.

If you spend a few days with your children in the Rhine metropolis, you should definitely take a trip to the zoo. To do this, enter the address Riehler Str. 173, 50735 Cologne into the navigation system of your hired car and take your offspring to the elephant park, the rainforest house and the monkey rock, among others.

Car Rental in the surroundings of Cologne Airport