from 26 £/day
Test winner
Convincing service
More than 34.000 happy customers
4,5 / 5
Cancellation free of charge
Up to 24 hours before pick-up Up to 24h before renting
We are happy to assist you with your booking!
booking@driveboo.com
Car Hire
Middle East
United Arab Emirates
Abu Dhabi Emirate
Abu Dhabi
Abu Dhabi Airport

Get a hired car at Abu Dhabi Airport (AUH) and look forward to an unforgettable trip to the UAE. Hiring a car for Abu Dhabi using online booking at Driveboo.com couldn't be easier, from small cars to luxury cars. Airport car hire companies offer choice, comfort, best service and reliability. Book your desired hired car online in advance and pick it up at Abu Dhabi Airport immediately upon arrival.

Where can I hire a car at Abu Dhabi Airport?

You can hire a car at Skypark Plaza at Abu Dhabi Airport. All car rentals are open 24 hours a day. Skypark Plaza, opposite Terminal 3, is only a short walk from Terminal 1 and Terminal 3.

You arrive at Terminal 2? The Skypark Plaza is only a 5-minute shuttle ride (every 20 minutes outside Terminal 2) or 1 km on foot.

You will find the following international and local car hire companies at Abu Dhabi International Airport:

Summer in Abu Dhabi: Book a hired car and get going!

Sunglasses on, music loud and off you go in your hired car through Abu Dhabi. Summer in Abu Dhabi is guaranteed to be an unforgettable experience, especially if you hire a convertible. Drive to the most beautiful beaches and soak up the sun during your summer holiday. On Driveboo.com everyone will find the right hired car for their perfect summer. Abu Dhabi is worth a trip at any time of the year. Especially in the summer months, make sure you drink enough and use adequate sun protection. In that way you will have the perfect summer in a convertible in Abu Dhabi.

The city terminal: a check-in desk in the city

Easy check-in at the city terminal

A check-in desk is located in city centre Abu Dhabi for travellers who want to check in in city centre Abu Dhabi before travelling to the airport. This facility, known as the City Terminal, resembles an airport terminal building and has lounge and transportation facilities. After check-in at the city terminal, passengers must arrive at the airport one hour before departure. Another check-in facility is operated by Etihad Airways at the Etihad Travel Mall on the outskirts of Dubai.

What are the transport connections to Abu Dhabi Airport?

Public transport links are provided by shuttle buses with the city centre terminal (an outsourced check-in desk), scheduled bus services to the rest of the city centre, as well as taxis or private minibus operators.

Taxis are, after hiring a car, the preferred way to travel. They are cheap and run by a state-owned company. Rates start from around US$ 1.50 and you can get from one side of the city to the other for less than US$10. Taxi drivers are mostly from India or other Asian countries and can speak English relatively well. Many taxis are equipped with an on-board computer that combines a taxi meter and navigation system.

The UAE Department of Transportation offers buses to destinations throughout the emirate of Abu Dhabi and to other cities such as Dubai, Sharjah and Fujairah. 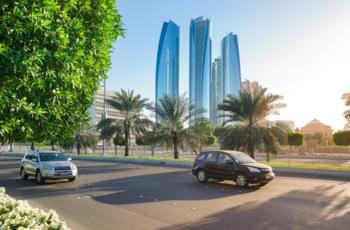 On the road in Abu Dhabi 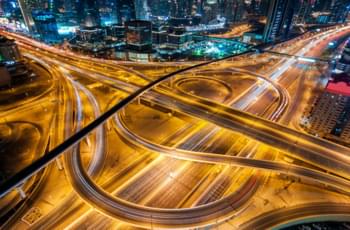 The UAE has a modern road system. Hiring a car or driving in the UAE requires an international driving licence, which is basically a translation of your local driving licence and can be obtained from a national automobile association.

Car rentals are relatively cheap. There is a flat fee per day for hiring a hired car based on the size and equipment of the car. Petrol is cheap according to European standards.

The road system is based on British or European standards, with many roundabouts and heavily concentrated traffic. But the traffic signs are easy to understand and are clear and visible in most places. The drivers in the UAE, especially in urban areas, are usually very aggressive - therefore, do not insist on your rights and adapt to the local conditions.

The lack of good road maps or detailed signage outside the cities makes the use of a GPS helpful, especially if you want to drive outside the motorway.

Desert safaris or "wadi bashing" are popular attractions near Dubai, but check carefully your hired car for this purpose; it should be a four-wheel drive one. Desert safaris are usually also offered by travel agencies and offer good value for money. You can often drive the SUV in desert sand for a while yourself.

Car Rental in the surroundings of Abu Dhabi Airport