Hire a Car at Dortmund Airport

You land at Dortmund Airport (DTM) and want to explore Dortmund by hired car? Then it is best to hire your hired car directly at the airport. Compare with Driveboo quickly and easily from home the rental cars of the approximately six car hire companies at Dortmund Airport online and decide on the hired car that best suits your needs.

When visiting a big city in winter, the exploration of the Christmas market should not be missed in any case. Therefore, definitely take a look at the Dortmund Christmas market, which stands between mid-November and late December. Enjoy the beautiful atmosphere with the largest Christmas tree in Germany and lots of different food and drinks. If you ever need a break from the cold, a visit to the spa is always a good idea. There you can relax and float in the water or just warm up in the sauna. If you like cultural things better, you can take a look at the last bunker of Dortmund, there you will learn more about the history of Dortmund. Should you be more interested in sporty things, then go watch a game of the soccer club BVB Dortmund, or a ice field hockey game of the Dortmund Ice Eagles. Also in winter, it's best to get everywhere by hired car, so you don't have to wait for public transportation in the freezing cold.

Which car hire companies are available at Dortmund Airport?

Fortunately, quite a few well-known car hire companies have now set up shop at the third-largest commercial airport in North Rhine-Westphalia, so that you do not have to forego any comfort with your hired car. Below, we have summarized the car hire companies that maintain a counter at Dortmund Airport:

Where is the nearest gas station at Dortmund Airport?

You don't have to go far if you want to fill up your hired car. This is especially important to know if you have chosen a hired car with the best fuel option (full/full). Because with this option, you get the hired car directly full of fuel directly at the airport, but you are also obliged to bring it back full of fuel. You will find a Esso gas station and another Westfalen gas station directly on the B1 or you refuel your car directly at the Esso gas station at the entrance to the airport. Note that if you return the hired car empty despite the option you chose, the rental company will keep part of the deposit you left.

Hire a car Dortmund Airport (DTM) - To the city center

Thanks to the airport's central location, you can reach Dortmund's city center in just over 20 minutes by hired car, so you can head straight out on your Dortmund exploration. While there, you should definitely take a look at the Signal Iduna Park and the Westfalenpark, while soccer-loving visitors are likely to enjoy the German Soccer Museum. In addition, the Industriemuseum Zeche Zollern and the Florian Tower are worth a diversion. Would you also like to get to know the surrounding area? Then we have compiled a few places for you below, along with the distance in kilometers: 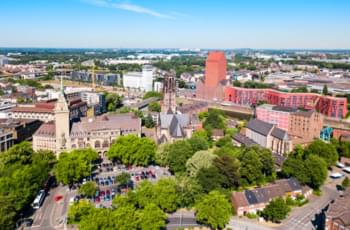 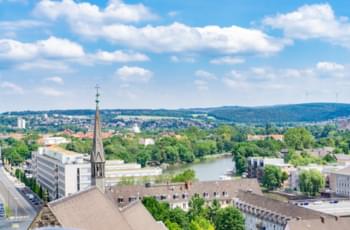 How to get from the airport car hire to the city

Do you want to pick up your hired car at the airport later or perhaps return it earlier? Then you don't necessarily have to hire a taxi to get to the city center, as you can also take public transport, such as the AirportExpress directly to Dortmund main station or take the Airport Shuttle in the direction of Holzwickede train station. 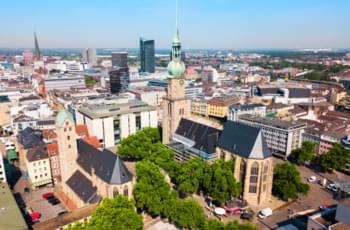 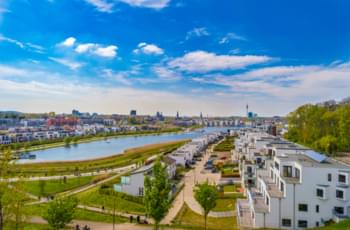 As the name one-way rental implies, this way you book a hired car for only one way. That is, with booked one-way rentals, you can pick up the hired car so at the place of arrival, which in this case probably would be the Dortmund Airport and later return the car at another location. Therefore, specify already when booking on the Internet, whether you pick up the hired car at the same place, or whether you choose here two different places for the pick-up and return station.

Dortmund is without question one of the cities in the Rhine-Ruhr metropolitan region, which exudes your very own charm. However, if after a few days you would also like to take a few excursions or a round trip with the small car, a sporty convertible or a family van, you have made a good choice with Dortmund, because you will find interesting destinations in every direction, which you can reach with your hired car.
Dortmund is also not lacking in culture. If you want to get an Asian feeling for a change, visit theSri Kamadchi Ampal Temple at Hamm and if you want to cruise comfortably on a ship, head to the Sorpesee at Langenscheid. But also the not too far away Castle Altena is worth a side trip, and if you are already in the region, then you should not miss a ride on the Wuppertal suspension railway. Another highlight of the region is also the Villa Hügel in Essen, which hosts rotating exhibitions, and if you're travelling with kids, you can also take a look at the Zeiss Planetarium in Bochum.

Car Rental in the surroundings of Dortmund Airport