Getting to know Ecuador with a hireal car

Pichincha is a province in Ecuador with over 2 million inhabitants. Quito is the center of the province. The name of province Pichincha comes from the volcano Pichincha. It is located directly next to the capital Quito and characterizes the cityscape. You will find an economic and cultural center. Other parts of the province are agriculturally preserved. Are you interested in a hireal car tour? Ecuador, with its diverse flora and fauna, is an ideal destination. Since public transport is rather poorly developed, a hireal car is the best solution for a round trip.

Traffic and regulations in Ecuador

You will need to take care following the local traffic regulations as well as you do back home. Inhabitants of the Latin American country also have a diffehire understanding of traffic. Many roads have already been renovated and enlarged, yet streets in rural areas are mostly in rather bad condition. Therefore we recommend you that you take care of an efficient insurance protection.

At the moment there are a lot of radar controls in Ecuador. Penalties are very expensive and start with the basic fee of $275. Furthermore if you have any problems: You will reach the police at 911.

Your hireal car in the province of Pichincha

Most of the cultural sight are directly located in the center of Quito. As Quito is a very big city is will be very easy for you to find hotels, restaurants, bars and hireal car stations to pick-up you car. Most tourists arrive at the International airport of Quito. It is the most comfortable thing to just directly pick-up your hireal car at the airport. All of the airport stations are located either inside of the terminal building or outside right next to the airport. If you will book a terminal station you will directly find the hireal car center behind the security check and baggage claim. If you have booked a station in the surrounding area of the airport, there will be a free shuttle-bus waiting for you at the exit of the building. After a short ride you will be arriving at the station.

There are some advantages of hiring a car at the airport.

What can I do in the province of Pichincha with my hireal car?

Quito offers many museums and colonial buildings. However, if you want to avoid the hustle and bustle of the city, the following examples are great day trips with your hireal car.

Mitat del Mundo is a monument next to Quito. The distance to the city center is approximately 25 km and it takes around 30 to 40 minutes by hireal car to get there. The monument marks the place where Charles Marie de La Condamine is said to have first proved the equator.

The Basilica is located in the historic center of Quito. It is the largest basilica in America and definitely recommended not only for religious people, but also for fans of architecture.

Pichincha is the symbol of the city Quito and the whole area. There are two peaks of the vulcano which can be visited. The first person who climbed up the mountain was Alexander von Humboldt. Follow him and be a real explorer. 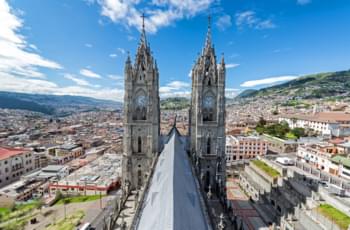 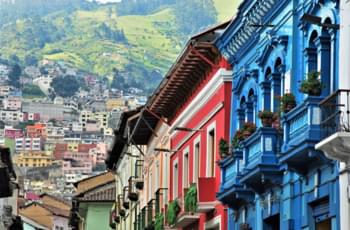 Where else can I drive to in Ecuador?

Quito and the surrounding province promises an excellent travel experience, though there are several other interesting places to be visited in the country. Here you can find some information regarding distances and travel times to other cities and important sights.